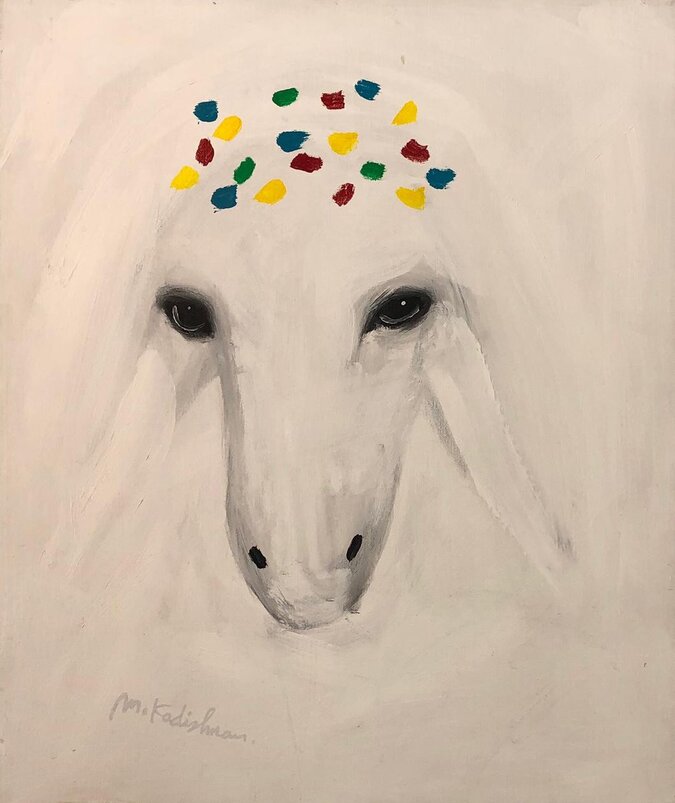 Untitled / Menashe Kadishman
Ask us about this work

Kadishman was born in Tel Aviv, where he began his tutelage as an artist under the guidance of Aaron Avni and Moshe Sternshaus. He was drafted into the first “Nahal” brigade and was stationed at Kibbutz Ma’ayan Baruch, where he worked as a shepherd, an experience that greatly influenced his future works. In 1959 he moved to London and attended St. Martins School of Art, one of the world's leading art and design schools. He then received a scholarship to study at the Slade Art School. Kadishman soon made a name for himself in London as a talented sculptor and began to show his works around the world. In 1972 he returned to Israel, and continued to create from his home in Tel Aviv until his death.

Kadishman was a respected artist in Israel and around the globe, winning important awards in the art world. Among the awards he received were first place in the Paris and Norway Biennale. In 1995 he became the recipient of the Israel Prize in sculpture. His installation at the 1978 Venice Biennale, where he presented live sheep and himself as their shepherd, is one of the event’s most acclaimed exhibitions to this day.

Embedded in every Kadishman work is a hidden message, metaphor, a forgotten memory, or harsh criticism. His work is ingrained with themes of hope and pain, love of country, anger at the sacrifice that country demands, the importance of fortitude in the face of wars and conflict. He was inspired by his experience as a shepherd and a soldier in the desert, where he discovered an extraordinary landscape that influenced his sculptural style. Through his sculptures, he gave the stories of the Bible a modern-day interpretation inspired by life in Israel. The most famous example of these interpretations is "The Binding of Isaac", displayed in the Tel Aviv Museum Plaza.

In his work, Kadishman expressed universal contradictions that exist side by side in the world we live in: the herd instinct versus the singularity of the individual, the pain of birth and the life it creates, the coexistence of hardship and hope. It is perhaps because of this unique capability that Kadishman is not just considered an inseparable part of the Israeli artistic landscape, but also as a symbol of Israeli art around the world.